Blessed William Joseph Chaminade was born in Perigueux, France, in 1761. He was the 14th child of a deeply Christian family: besides him, three of his brothers were priests. In 1771 he entered the minor seminary of Mussidan. He was ordained a priest in 1785. In 1790 after the outbreak of the French Revolution, he moved to Bordeaux, where he spent most of his life. In 1791 he refused to take the oath of the so-called Civil Constitution of the Clergy and clandestinely exercised his priestly ministry, putting his life in constant danger.

At this time he came to know the Ven. Marie-Therese-Charlotte de Lamourous (1754-1836), who was one of his closest collaborators and whom he later helped to found the “Misericorde” in Bordeaux to aid fallen women.

In 1795 he was given the delicate task of receiving back into the Church priests who had taken the constitutional oath. He facilitated the reconciliation of some 50 priests. In 1797 he was forced to emigrate to Zaragoza, Spain, where he lived for three years. Near the Shrine of Our Lady of the Pillar, he forged his Marian-apostolic convictions and was inspired to found a family of religious and laity, dedicated to Mary.

In 1795 he was given the delicate task of receiving back into the Church priests who had taken the constitutional oath. He facilitated the reconciliation of some 50 priests. In 1797 he was forced to emigrate to Zaragoza, Spain, where he lived for three years. Near the Shrine of Our Lady of the Pillar, he forged his Marian-apostolic convictions and was inspired to found a family of religious and laity, dedicated to Mary. 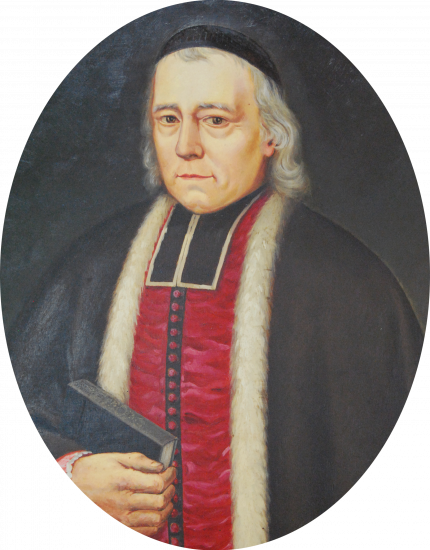 In November 1800 he returned to Bordeaux and refounded the old Marian Sodality on a new basis. He made every effort to give his sodalists a solid religious formation and directed them towards precise apostolic objectives, encouraging them to offer to an indifferent society the spectacle of a people of saints.

In 1801 he received the title of Missionary Apostolic from the Holy See: it was the official confirmation of his insights into the Church in this new era. Fr. Chaminade viewed his own ministry and that of the Marian Sodalities as a permanent mission, directed towards formation in the faith, using new methods and working in close alliance with Mary.

In 1816, together with the Ven. Adele de Batz de Trenquelleon (1789-1828), he founded at Agen the Institute of the Daughters of Mary Immaculate (FMI), and the following year, at Bordeaux, the Society of Mary (SM). His first members, who would later be called Marianists, were members of the Marian Sodalities, men and women who wished to respond to the Lord with a more radical commitment.

The two Institutes in 1839 received the Decretum laudis from Pope Gregory XVI. Since teaching was a primary need at that time, both Institutes of Marianists dedicated themselves to primary and secondary schools and to trade schools. They taught in order to educate and form their pupils in the faith.

The last 10 years of Chaminade’s life were a time of severe trial, as obstacles to the exercise of his Founder’s mission. He faced these difficulties with great confidence in Mary.

He died peacefully in Bordeaux, surrounded by many of his sons, on January 22, 1850.

On September 3, 2000, in St.Peter’s Square the Beatification of Fr. Chaminade was officially declared by His Holyness Pope John Paul the Second.

To the south of Bordeaux a road leads down across the Pyrenees into Spain. This was the road Father William Joseph Chaminade followed into exile in September of 1797.

He was a French priest in disguise, escaping the enemies of the Church in his native land. Close by lay the danger of arrest. Other priests had already died as martyrs.

But Father Chaminade was at peace. He was a man of faith.

The night before his journey into exile Father Chaminade wrote:

“What is a faithful man to do in the chaos Of events which seem to swallow him up? He must sustain himself calmly by Faith. Faith will make him adore the eternal plan of God. Faith will assure him that to those who love God all things work together for good.”

In Saragossa, Spain, near the Shrine of Our Lady of the Pillar, Father Chaminade settled down to wait out his exile. Here he prayed and planned for his future work. And here he received from Our Lady a special message. He was to be Mary’s missionary. He was to found a society of religious who would work with her to restore the Faith in France.

Two of Father Chaminade’s favorite prayers reveal the intensity of his love of God and of Mary: The most just, most high, and most amiable will of God be done, praised, and eternally exalted in all things!

May the Father and the Son and the Holy Spirit be glorified in all places through the Immaculate Virgin Mary.

Father Chaminade returned to Bordeaux in 1800. There he established Sodalities of OurLady which spread their influence throughout France.

He considered himself a missionary of Mary. Strong in his love for Our Blessed Mother, he gathered men and women around him who dedicated their lives to her service.

Working together, these men and women of Faith began to rebuild the Church which had been destroyed.

The Society of Mary and the Daughters of Mary sprang from the sodalities of Father Chaminade. These groups continue to do Mary’s work in countries all over the world. Because Chaminade’s work was the work of Mary, it remains. And the words of this man of Faith still speak to us today.

From the Chapel of the Madeleine as from a fountain, grace poured throughout the entire city of Bordeaux and southern France. To this day the Madeleine, in the old down-town section of Bordeaux, is a center of Christian life. There Marianist priests and brothers, members of the religious congregation Father Chaminade founded, minister to the people. Many come to pray, to receive the Sacraments, or to seek spiritual refreshment.

All kinds of people involved . . .

From the beginning Father Chaminade invited people from varied backgrounds to work with him.

There were husbands and wives, teachers, business men, young men and women, seminarians, priests, and representatives of every class.

Together they worked to rebuild the shattered Faith in France.
Together they found a deepening of their own Faith in the imitation of Jesus.
Together they responded to the words of Mary at Cana, “Do whatever He tells you.”
Father Chaminade called this group the Family of Mary. Their outstanding characteristic was a deep spirit of Faith.

For Chaminade, Faith expresses itself most perfectly in the imitation of Christ:

“A true Christian cannot live any life but the life of Our Savior Jesus. When we try to imitate Him the divine plan is carried out in our lives. The Blessed Virgin is our Model. She is a very exact copy of her Son Jesus. When we are devoted to Mary we will imitate Jesus.”

YOU MUST TASTE WHAT YOU BELIEVE – Father Chaminade

The importance of Mary
Father Chaminade never tired of speaking about the strong, victorious Virgin Mother of Christ:

“Jesus made Mary the companion of His labors, of His joy, of His preaching, of His death. Mary had a part in all the glorious, joyous, and sorrowful mysteries of Jesus.

The deposit of the Faith is entirely in Mary. At the foot of the Cross she held the place of the Church.

The mysteries which were announced to Mary were accomplished because she believed.”

History of the beatification cause

Chaminade died January 22, 1850. He was buried in the Carthusian cemetery in Bordeaux. In 1871 his remains were removed from the priest’s vault to a large square plot where a monument was erected to his memory. Father John Lalanne, the first Marianist, spoke on the occasion. He said,

“We were witnesses during our younger days of his life and words. We affirm that we never saw him spend a day, not even a single hour at anything which did not relate directly to God and to the welfare of souls.”

Before long people began to come to his tomb. Some of them remembered him as a saintly old priest. Others knew only that a holy man was buried there.

In 1973 Pope Paul VI proclaimed that Father Chaminade had practiced virtue in a heroic degree. This proclamation of the Church is an official step toward the beatification and canonization of Father Chaminade.

In 1995 the healing from lung cancer of Elena Otera, a resident of Buenos Aires, was studied as a possible miracle to be attributed to the intercession of Chaminade. After a positive conclusion in the local inquiry conducted by the Marianist Postulator of the cause, the matter was referred to the Vatican for investigation. The medical boards consulted by the Congregation for the Causes of Saints finally declared her healing as “scientifically inexplicable” in January 1999. A review of the cause then took place by the theologians and bishops of the Congregation. They voted unanimously in favor of declaring a miracle that following October. This was approved by Pope John Paul II, who beatified Chaminade in 2000.