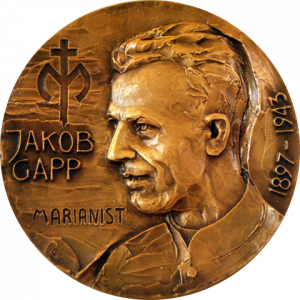 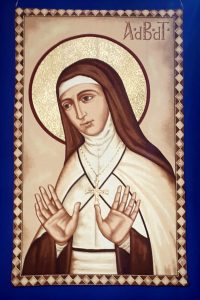 Jakob Gapp, after serving as a soldier in World War I, entered the Society of Mary (Marianists), and became a teacher. Later he was ordained to the priesthood. While stationed at Graz, Austria, 1934-1938, he made a careful study of the ideology of the growing Nazi movement, comparing its literature with the teachings of the Church, especially Pope Pius XI’s brave encyclical against Nazism, Mit brennender Sorge. He became convinced that National Socialism was “abhorrent and totally irreconcilable with the Catholic faith.”

After the Nazi takeover of Austria in 1938, he experienced the grief of seeing even his own school put up pictures of Hitler in the classrooms. Required by his superior to wear a Swastika badge and greet people in public with a “Heil Hitler,” he conscientiously refused. He felt it his duty to continue in the schoolroom and in his sermons to denounce Nazism as anti-Christian. When a fellow teacher was reported as telling the children they should “hate and kill Czechs and Jews,” he considered himself duty-bound to refute him in his own class. 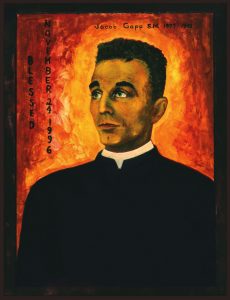 One day he reminded his pupils that since the French, Jews and Communists were all human beings, so the Christian is bound to love them. “God is your god,” he added, “not Adolf Hitler.” For those statements he was summarily suspended as a teacher. By now Fr. Gapp was attracting animosity and his safety could no longer be assured. In 1939 he went in exile to the SM mother house in Bordeaux, France. Not long afterward he went still farther away, to San Sebastian, Spain.

In 1942 he went to the British consulate in Valencia, hoping to get a visa to England. Although he got no visa, he did borrow some British newspapers that might tell him, as the censored German papers never did, just what was going on within the German Reich. Discounting the propaganda in this literature, he finally learned something about the current persecution in Germany, and its prison camps, and the international criticism of Nazi atrocities.

Once in Spain two men who claimed to be Jews asked him to instruct them in the Catholic Faith so that they might be baptized. Fr. Gapp consented. On a certain day in November 1942, the two “Jewish” students took him on a picnic near the French border. He never returned home, for the two phony Jewish pupils spirited him across into France where Gestapo agents were waiting to whisk him off to Berlin.

The evening of Aug. 13, 1943, 13 years to the day that Gapp had joined the Marianists, he wrote a letter to his superior, concluding, “today I hope to begin the life of eternal happiness.” Then, he went calmly to the execution shed of the Plotzensee prison and was beheaded, earning, not Nazi honor, but eternal honor.

Thanks to the care with which this police agency kept its records, Fr. Gapp’s replies to his interrogators have all been preserved.  He explained calmly that Nazi doctrine was entirely unacceptable to a Catholic. As a Catholic priest, therefore, it was his duty to put God before Caesar and denounce Nazism every step of the way.

One of his interrogators (who is still alive) says that Heinrich Himmler, head of the Gestapo, insisted on reading transcripts of all that the Marianist priest said. Himmler eventually observed to one of the judges, that if the million Nazi party members were as committed to Nazism as Father Gapp was to Catholicism, Germany would be winning the war without difficulty.

On the basis of his visits to the British consulate, however, the court that tried Gapp condemned him to death for treason. Jakob Gapp was beheaded by guillotine at Berlin on August 13, 1943. The police would not release his body, fearing that Catholics would make a martyr of him. Ironically, the Gestapo itself did that in saving his records.

One of Gapp’s students remembered him as teaching that, even more broadly, the law of Christ demanded that “one must selflessly assist anyone, even one’s ideological opponent, if he is in existential trouble or difficulty.” Father Gapp practiced what he preached.  In addition to standing up for despised groups, he deprived himself of necessities like fuel for heating in winter in order to help the poor. Gapp knew that people who  approached him for moral advice or formal instruction might be Nazi agents, but decided early on that his status as a priest demanded he tell the truth whatever the consequences.  He was beatified in 1995.

We can only be thrilled by the behavior of martyrs like these. But must we not further ask: how would we have acted if we were they?